2011-present
Christina Marie Harris (also known as her YouTuber name BeautyChickee) is an Internet personality known for her beauty tutorials.

Christina Marie Harris was born on June 3, 1999 to Debbie and Jim Harris. She has a brother named Jimmy Harris (born 1996).

She launched her popular YouTube channel on May 8, 2011.[1] She then created a second YouTube channel, ChickeeVlogs, in early 2012. Initially she kept it hidden from her parents, but upon hitting 200 subscribers, told them and they were supportive.[2]

In April 2018 she announced of her #NoFilterTour which toured across North America beginning on June 9th in Minneapolis, Minnesota. New tour dates were added in August, and the tour concluded in Ontario, Canada.

She embarked on her second tour, the Mind Your Business Tour which was announced on May 31, 2019. It began on July 13 in Orlando, Florida and concluded on August 18 in Boston, Massachusetts.[3]

In eighth grade she was bullied for her YouTube channel, which only progressed in ninth and tenth. In her series "Chickee Chit Chat" when talking about underwear, the bullying got even worse, and some classmates printed out the video's thumbnail and passed them around the school.[4] Due to the mockery and not knowing who to trust, she kept it to herself and didn't have many friends. In her junior and senior year, she took cosmetology classes and stood up for herself by telling the guidance counsellor for safety. She eventually found people who were supportive and genuinely liked her. She graduated in Centereach High School in June 25, 2017.

She and her boyfriend, Corbyn Besson, broke up in early 2020. Though they releases the news in late 2020 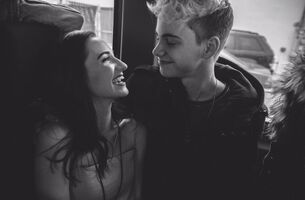 "So, here's whats been on my chest:

I don't feel like I have my own name as an individual anymore. I have been noticing this for a while, but especially within the past two/three months. I felt that my individuality of me being "Christina Marie" or "BeautyChickee" is an image that has been overlooked... due to my relationship.

I feel that I have only been classified as "Corbyn's Girlfriend" lately as if that is the only thing that makes me the person I am. What I mean by this, is that people don't realize that there is more to me than just being a musicians girlfriend. I am a YouTuber (I have been since 2011), I create weekly videos about fashion and beauty, I am a face on social media as my own person.

I feel that all the hard work I put into my social media and into my YouTube channel and videos is being neglected due to this. For example, when I do younow broadcasts, the only thing I've seen is people wanting me to call corbyn, FaceTime corbyn, guest corbyn, text corbyn, tell corbyn this, tell corbyn that, etc. etc.

I broadcast on younow because it is one of the best forms of social media connection with my chickees that is fast and efficient. I go live to talk about all sorts of things, and yes I do talk about my relationship sometimes which is completely fine! However, when I go live, and the only thing i see in the comments is about wanting to talk to my boyfriend over me, it hurts me a bit. It makes me feel as if my boyfriend is the only reason people are watching me, so they can try to get a closer look into his life, and that people aren't watching me for actually wanting to watch me talk about other topics or teach how to do a certain makeup look.

I built the image that I am today and that lots of people still do recognize me as; beautychickee. But all the time I spent growing and building myself on YouTube and social platforms, just in the end to be known more as a girlfriend than my own image, is upsetting to me :/

My intentions of writing this post and discussing this issue is not to bash on my own boyfriend or our relationship, it is not to call anybody out on anything, but more just something I feel should be informed to you chickees, since I love you all very much, and if there is something like this that happens to be a bug on my shoulder, I feel a need to share it.

I don't want anybody to get the wrong idea of maybe I am saying this because I don't love my boyfriend as much as I claim to, or maybe Id rather hide our relationship from the public, or maybe even that I am not proud to be his girlfriend. I am here to inform you that all those are completely false.

I love my boyfriend with all my heart, he means the absolute world to me. I share our relationship with you all on my social media because, hey, what girl doesn't love showing their relationship off? lastly, I am BEYOND proud to be his girlfriend, and I truly mean that. I already spoke to him about the issue last night, and he was not offended at all (as I didn't believe he would be) and was extremely understanding and knew exactly where I was coming from, and agrees with my views on things.

Long story short, I am proudly Corbyn's girlfriend (of course), but I am also my own person, and I like to be seen as my own person. I am Christina Marie, I am BeautyChickee. And I thank you guys for taking the time to read this entire thing (if you even made it to the end). I love you all so much, thank you![8]

Retrieved from "https://whydontwe.fandom.com/wiki/Christina_Harris?oldid=6108"
Community content is available under CC-BY-SA unless otherwise noted.