Daniel James Seavey (born April 2, 1999) is an American singer-songwriter, musician, and producer from Vancouver, Washington. He is part of the five-piece band, Why Don't We. In 2015 he appeared on the h14th season of American Idol with his rendition of "Hallelujah".

Since he was little, his mother described Seavey to have perfect pitch and find music in everything. By the time he was ten years old he could play the piano, guitar, alongside the violin and the cello. He participated in a few talent shows. He and his father used to travel down to Portland to play music on the street for art walks. The first time he performed, covering Adele's "Someone Like You", there were about three hundred people present, stopping traffic.[1]

In January 2015, Seavey appeared on the fourteenth season of American Idol with the song "Hallelujah". He met future band mate Jack Avery at the auditions, though Avery didn't make it through. Seavey made it to the Top 9 before being eliminated on his birthday. He considered the whole experience to be his "first chance" and thought that he didn't work hard enough as he should have. The night he was voted off, Harry Connick Jr. came into his dressing room and gave a number to contact. Sometime later Connick contacted him, holding out an offer to be an opening act at a show near his hometown. After touring for two weeks on the road along with his sister, it reminded him of his love for music.[1]

He began to play at local shows and auditioned for anyone who let him. He uploaded covers to his YouTube channel and did a cover collaboration with Lovey James in 2016, "Secret Love Song". He met Jonah Marais through a mutual friend in Portland, and noticed Corbyn Besson online and started to message. He didn't know Zach Herron that well, but watched the "Stitches" video.

He initially was not in the first meetup of the band in Los Angeles, but then Avery brought his name up and all five instantly clicked. On September 27, 2016, they formed the band Why Don't We, which Seavey considered as his "second chance". Since then they've released two studio albums: 8 Letters and The Good Times and The Bad Ones, which both charted; five EPs: Only the Beginning, released in 2016, Something Different, Why Don't We Just, Invitation, and A Why Don't We Christmas, released in 2017; and did four tours, their 8 Letters Tour being international. In January 2021 their second studio album The Good Times and The Bad Ones was dropped, followed by their EP The Good Times in March.

One of the musical inspirations are The Beatles.[2] He named another one of his influences to be Drake, for his consistent release of songs.[3] Growing up he was deeply influenced by his parents' taste in music which included P.O.D and Falling Up, Norah Jones, Adele, and Madonna.[1]He admits to always liking Ed Sheeran's songs and songwriting and Post Malone being someone he always wanted to collaborate with.

After Seavey's experience on Idol, he struggled with depression, being taunted by his classmates, reminding him of being back to where he started. Just when he was about to give up, his parents encouraged him to keep going and work hard.

Due to putting off his studies in pursuit of his musical career, Seavey graduated from high school in 2017.[4]

As a featured artist[edit | edit source]

He has five known tattoos. The first he posted over his Twitter account. It is the Dwennimmen (Ram's horns) which is an Adinkra symbol of humility and strength on the inside of his wrist. The second was posted over his Instagram story on December 8th, which has altogether three linked together: a tree, a tally mark, and a palm tree located over his first one. It may represent his transition from Oregon to Los Angeles with his band. The fifth one is a banana tattoo matching with the rest of his band mates. The sixth one on his leg for his friend Corey who passed away in the summer of 2020. His most recent tattoo is the title of the band's latest album, The Good Times and The Bad Ones, located on the arm. 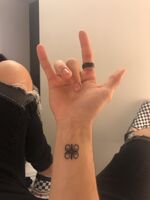 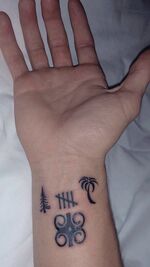 He's the hottest one why don't we

Retrieved from "https://whydontwe.fandom.com/wiki/Daniel_Seavey?oldid=6191"
Community content is available under CC-BY-SA unless otherwise noted.