Why Don’t We Wiki
Register
Don't have an account?
Sign In
Advertisement
in: Jonah Marais, Musicians, People,
and 3 more

Jonah Frantzich (born June 16, 1998), known professionally as Jonah Marais, is an American singer-songwriter and part of the musical group Why Don't We. He is the eldest member of the band. He gained a fanbase through YouNow, a live-streaming video site.

Jonah Marais Roth Frantzich was born in Stillwater, Minnesota, to Carrie and Timothy Frantzich. His parents used to come up to the small town called "Grand Marais" every summer. One year they couldn't because he was born when their trip was scheduled, which is where part of his namesake derived from.[2] He has three siblings: Zebulon Frantzich (born December 26, 1991), Esther Frantzich (born March 31, 2000), and Svea Frantzich (born March 21, 2007).

Marais taught himself to play instruments and to sing. When he was in sixth grade he did his first talent show, which was a piano cover of John Lennon's "Imagine".[1] Everyone in his family is musically talented, and sang wherever they could, including at fairs, and churches. They once sang Jason Mraz's "I'm Yours" at a corner outside a bakery.[1] Marais grew up playing baseball when he was a freshman in high school. He played on teams that won tournaments and thought he would become a major league baseball player. Near the end of his freshman year, however, his mother was diagnosed with breast cancer and to keep his mind off, started to use the Internet as an escape.

Marais used the platform YouNow in 2014, and at the end of summer gained 10K followers, and was able to do social media tours through this.[3] Halfway in his tenth grade he dropped out of school to fully pursue his musical career. His first live performance was at DigiFest in front of 7000 people. He also met his future band mates Corbyn Besson, Jack Avery, and Zach Herron through touring. On July 7, 2015, his first released single "I Meant It" was dropped along with its music video in August the same year. In March 2016 his single "War Paint" was released and served as the lead track for his first debut EP When the Daylight's Gone in April 2016. He also went on his own solo tour. "Next Ex Girlfriend" (featuring the Potash Twins) was his last solo song prior to joining the band Why Don't We, which was four days later officially announced.

Ed Sheeran is one of his biggest inspirations, which he told in a iHeartRadio interview.[4] His father was also in a band and is his biggest mentor.[1]

Danielle Nicole "Dani" Calleiro (née Cimorelli) is a singer, YouTuber, and graphic designer, formerly the youngest member of the group Cimorelli. She left the group in January 2020 and started her own YouTube channel, 'Dani Calleiro'. Marais dated Dani from August-October 2014. Calleiro made a video about the relationship in 2015, as part of the Cimorelli Storytime series, without taking his name, and made another video on her own channel in 2020, where she did drop his name, as many people already knew about the relationship by then. Marais mentioned their relationship in the band's book, Why Don't We: In the Limelight (2018). After their breakup, the two maintained their distance. The two respect each other but prefer not to talk about each other. Contrary to popular belief, "Perfect" is not about Calleiro, as Marais didn't consider the relationship as "serious". There is also no evidence in their relationship that matches up with the lyrics of the song. However, Cimorelli's song "Before October's Gone" is based on their relationship. Marais even promoted the album on Twitter in 2016, proving there is no bad blood between them.[5]

He dated Alyssa Longoria (née Shouse) sometime near the end of 2014-2015. They released a cover of One Direction's "Little Things" together. There was some controversy over the relationship at the time, since she was three years older than him. Despite their breakup, they remain good friends.

He and Tatum "Tate" Dahl met on set when filming the music video "Trust Fund Baby". Their relationship was kept private, but fans have speculated that they've been dating since 2018. They are no longer together, yet nothing was officially announced in 2020. Based off her Instagram, she has removed her highlight stories about Marais and the band. Marais confirmed they'd broken up, but not much information was provided on the cause. Over several videos, Dahl addressed that their relationship was toxic, where there were a lot of personal sacrifices just to maintain their relationship. Due to conflicting work schedules and keeping their relationship a secret, it can be suggested this is why they split up. She also addressed the misogynistic dating in the music industry, where women would typically be subjected to hatred online, opposed to men.[6]

Marais has 11 known tattoos as of November 2019. The loon was the first tattoo he ever got, which is the Minnesota state bird. The sun is for his Grandma, "Sunny", who was one of his biggest supporters. There is an eagle on his wrist (March 10, 2019), the palm tree on his forearm (May 23, 2018), the baseball diamond, 1998 (his birth year) and the outline of the state of Minnesota which is his hometown with a lake by his house, the bridge, and the Minneapolis skyline (September 14, 2018). He has the lightening bolt for spontaneity, "Breathe Deep" on his ankle (July 28, 2018), a banana which he got in Nashville while on tour along with a few friends, and the tiger because he was born in the year of the tiger and it is his favorite animal (September 26, 2019). 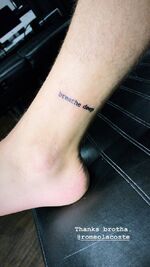 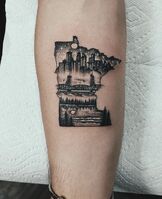 state of minnesota, his hometown 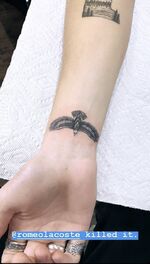 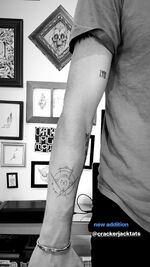 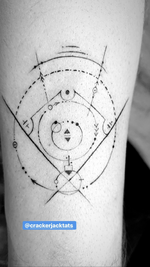 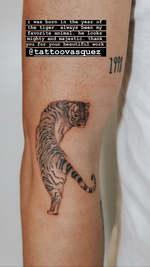 tiger; favorite animal & born in year of the tiger 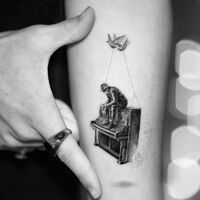