This article is about the tour. You may be looking for the song.

The Taking You Tour is Why Don't We's first headline tour. It began on January 27, 2017 in Burnsville, Minneapolis, and concluded on February 25, 2017 in Anaheim, California. 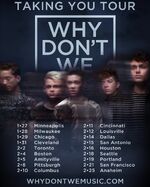 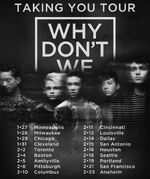